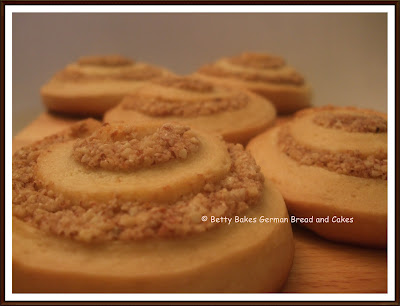 This is another traditional south-west German speciality with a silly name – translated literally these twirls are called ‘snail noodles’. (The epitome of silly names is the Swabian take on the doughnut, also called ‘nuns farts’ or Nonnenfürzle, but I’ll get back to this another time). The Schneckennudel makes a regular appearance at an old German ritual – Kaffee und Kuchen. Traditionalists observe Kaffee and Kuchen daily at about 3 pm. This includes vast amounts of hot drinks (coffee, of course, or tea if necessary) as well as a selection of cakes and pastries and gossip. An invitation to Kaffee und Kuchen is less formal than a dinner invitation and thus often extended to new acquaintances or to people you can’t face spending more than 2 hours with. Having said this, especially at weekends visitors often arrive in the afternoon for Kaffee and Kuchen to be followed by more food in the evening. When I was a child we had visits or visited relatives most weekends and usually this involved coffee and cake, followed by a few hours during which the adults chatted and the children made a huge mess in the garden or basement. Then dinner and the grand finale – disassembling the haunted houses/nomad tends/spaceships we had built, and tidying up the debris (usually by the mothers).
Working full time and living with somebody who does not fully appreciate this fine custom I rarely partake in Kaffee und Kuchen in the UK, but I still bake most weekends. In fact, I just finished baking these twirls and I will eat one with a coffee as soon as I have posted this post. Schneckennudeln can be found in every bakery in the south-west of Germany, but they are also easy to make at home. Traditionally they are filled only with melted butter, a mixture of sugar and cinnamon and raisins. However, as I don’t like raisins very much I prefer this nutty variant – baked with a mixture of hazelnuts and almonds in this recipe, but any combination of nuts will work. This recipe makes about 20 twirls, which can be frozen and reheated.
For the dough:
220 ml warm milk
100g melted butter
20 g fresh yeast (or one sachet dry)
500g plain flour
100g sugar
1 egg
1 tsp salt
For the filling:
200g ground nuts of choice
80 g sugar
1 shot dark rum or amaretto
1 tsp cinnamon
150 g double cream, whipped slightly
Some melted butter
Combine the warm milk and butter and dissolve the yeast in this mixture. In a large bowl combine the flour and sugar. Pour the warm milk mixture on top of the flour and leave to stand for about 30 minutes or until the yeast is activated and bubbling. Add the egg and salt and knead patiently until you have a ball of dough that is soft, but not sticky (add a bit of extra flour if required). Leave to rise for 1 hour. Stretch and fold the dough and leave to stand again for about 30 minutes.
In the meantime combine all ingredients for the filling – leave to stand at room temperature so all the liquid can be absorbed. 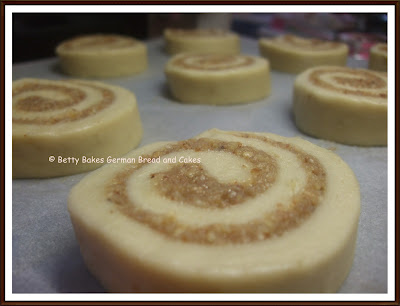 Roll the dough out in the shape a large rectangle – about 40 x 50 cm. Brush with melted butter then smooth the filling on top and roll up. Cut into pieces about 2-3 cm thick. I briefly freeze the dough before cutting as this helps the twists keep their shape more easily. Leave to rise for another 10 minutes or so then bake at 180 degrees for about 20 minutes.
Posted by Betty at 14:46