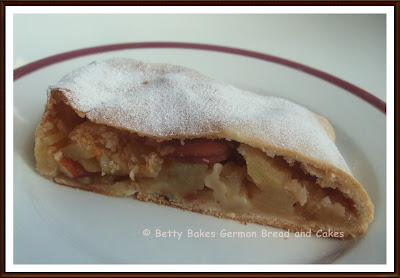 The strudel pastry is versatile and actually quite easy to make and use. All it takes is a bit of patience and (as we call it in German) ‘fingertip feel’ to roll and pull the pastry carefully until it is paper-thin. The recipe below makes one strudel that cuts into about 6 thick slices. The filling in my recipe is fairly classical, but endless variations are possible (other good fruit to use are pears, cherries and apricots. You can also add some sweetened quark or rum raisins or you could replace the breadcrumbs with ground nuts of your choice). Traditionally the strudel is served hot with chilled vanilla sauce (like custard just thinner). Whipped cream, vanilla ice cream or Greek yogurt is also great, but decent hot custard would also do very well!

For the filling:
About 50 g melted butter
3 tablespoons fine dried breadcrumbs
3 large apples
Sugar to taste mixed with cinnamon
A handful of chopped almonds
A handful of raisins

For the pastry combine the flour, butter and egg and then knead vigorously on the kitchen surface for at least 10 minutes. This is very important to ensure that the pastry is elastic enough later to be rolled out and pulled as thinly as possible. Once the pastry is quite elastic cover it in clingfilm and leave to rest in a warm place for about 1 hour. A good way of doing this is to heat up a ceramic bowl with hot water and then dry it and place it upside down on top of the wrapped pastry.

In the meantime prepare the filling. Peel and core the apples and cut them into very thin slices. Roughly chop the almonds and melt the butter.

When the pastry is ready to go sprinkle a large dishtowel with flour and put the ball of pastry in the middle. Roll out the pastry as thinly as possible with a rolling pin on top of the dishtowel. Then use your hands and carefully pull the pastry in all directions until it is so thin that you can see the pattern of the dishtowel through the pastry.  The sheet of pastry should be about 40 by 30 cm big and not much thicker than 1 mm. Now brush the pastry with the melted butter and add the filling. Start with the breadcrumbs and then add the apples. Sprinkle with as much sugar and cinnamon as you like (I use about 80 g of sugar with about half a teaspoon of cinnamon) and add the raisins and nuts. Leave about a 2 cm edge without any filling on the short sides and on one of the long sides of the pastry. Fold the edges of the short sides over the filling to prevent this from spilling out later.

Now roll up the strudel. This is very easily done by just carefully lifting the dishtowel on the long side of the pastry without the edge and the strudel will more or less roll itself up. Transfer the strudel onto a baking sheet (it is best to lift it onto the baking sheet with the dishtowel and then to carefully remove this) covered in baking paper and bake in the preheated oven at 200 degrees Celsius for about 40 minutes.

When the strudel is golden brown remove it from the oven and leave to cool slightly. Sprinkle with icing sugar and serve with vanilla sauce or anything else you fancy.
Posted by Betty at 16:37

Email ThisBlogThis!Share to TwitterShare to FacebookShare to Pinterest
Labels: Fruity